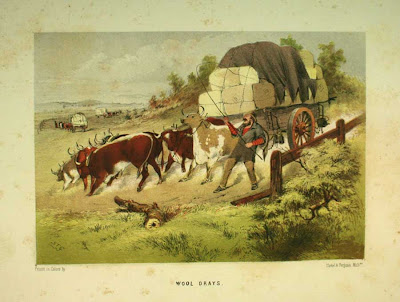 When European settlement began, the new settlers hugged the coast and waterways. Land transport was just too expensive.

Wool changed this because it provided a high value product that could justify land transport. 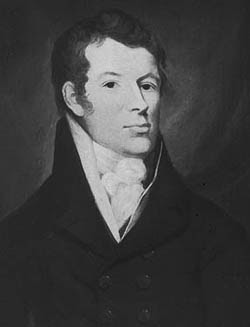 Macarthur was a difficult man, something of a commercial buccaneer, whose clashes with various Governors culminated in Australia's one and only military coup.

The first auction of Australian wool was held at Garraway's Coffee House in London in 1821. By 1838 sheep had moved into every Australian colony, the annual wool clip was over two million kilos and wool had become Australia's main export. 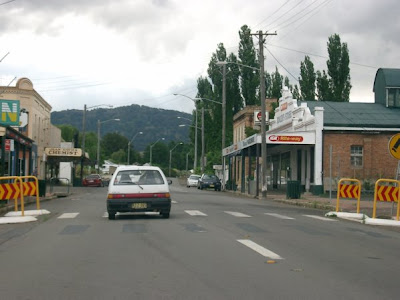 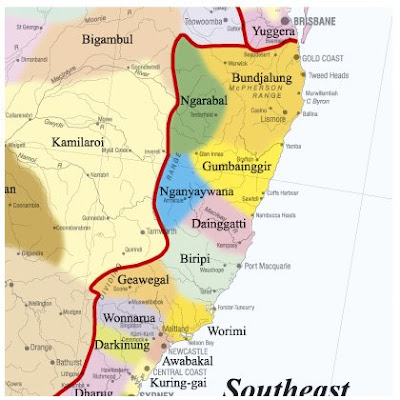 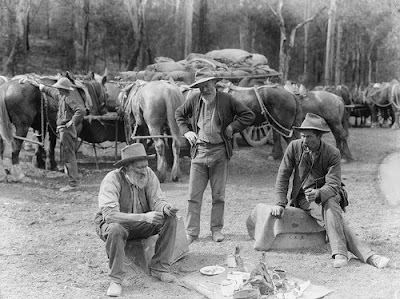 Those heading north to take up land had to pack everything onto drays, not just tools and household goods, but also basic rations.

The drays travelled at best at the pace of the stock, creating a constant stream of noise and dust. Men were needed not just to drive the drays, but also to act as shepherds.

This much late photo from the Powerhouse Powerhouse Museum shows teamsters having a break. While later, it gives a feel. 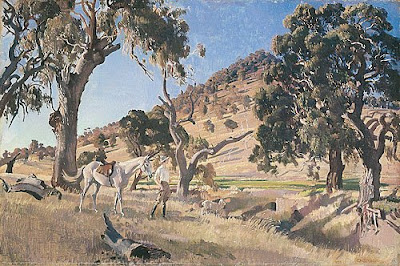 This painting by George W. Lambert painted in 1923-1924 is simply called The squatter's daughter.

The squatters who went north from the Hunter Valley to find new land may have been just that, illegal squatters, but within a short time in historical terms they were to become an establishment in their own right.

On Personal Reflections, the week's posting began with Sunday Essay - chick flick books, social change and the desire to escape, further musings on the process of social change in Australia.

This was followed on 1 September by two posts: Blog Performance - August 2008 and then Political parties are NOT brands. The second complains about the misuse of language and the way that this affects thinking.

3 September saw two posts. Mechanistic management and Mr Rudd's education revolution suggests that whole Rudd education revolution is bound up in the semantics of modern managerialism, set within the bounds of past ideas, while 3 September 1939 - the Second World War starts simply notes that the anniversary of the start of the Second World War appears to have passed without any comment at all in the Australian media.

There were two posts on 6 September. The costs of standardisation and uniformity continues my constant discussion on management and public policy, while in Election Night 6 September 2008 I tried my hand at live blogging the WA election results.

There were also three posts on Regional Living Australia.

There were just two posts on Managing the Professional Services Firm. Raising one's eyes unto the hills simply provided a copy of one of Gordon Smith's photos, while Establishing a Discipline of Practice - stocktake of posts is as the name says.